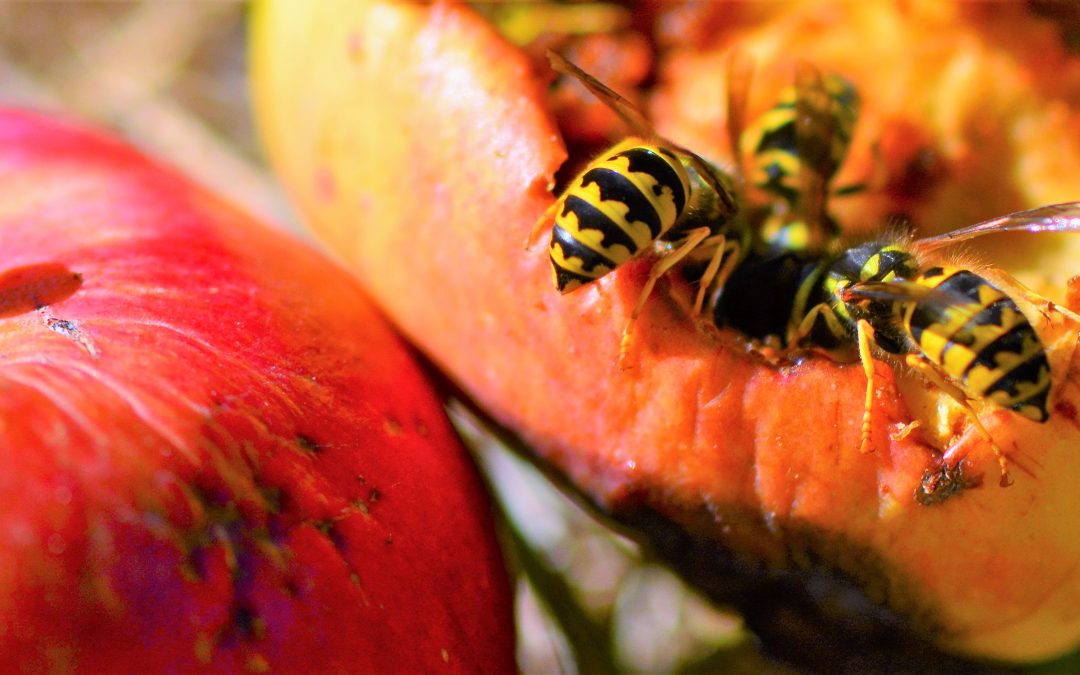 In late August 2011, as I was preparing my food for the next day’s hike to the top of Mount Whitney, yellow jackets swarmed around me. Not just one or two. Twenty or thirty of the brazen little creatures were going after my turkey luncheon meat and tomatoes. I was cooking turkey bacon, too. Another batch of “meat bees” as they’re often called were going after what was supposed to be my next day’s breakfast. I wish I had brought some yellow jacket traps.

Flash forward to early September 2016, during one of the worst yellow jacket infestations the Sierra has ever seen. My husband, Patrick, and I were standing in campsites at Emerald Bay State Park Campground, researching our Lake Tahoe Camping With Privacy book. Yellow jackets swarmed around us. Their buzzing sound was a constant companion no matter where we walked in the campground. Once, as I was taking notes, there was a tickle on my leg. Without thinking I brushed at it. “Ow!” One of the little guys stung me. I felt really bad for people who were camping there that weekend.

When you’re camping in the Sierra from late August to late September, chances are good you’re going to have a yellowjacket encounter. Some years—thankfully only rarely—it’s more than a nuisance and takes some of the pleasure out of camping. Other years, only one or two of them might hover around you as you pack up your lunch or prepare dinner. Mild winters with less snow and mild springs produce the largest number of these small wasps, because the queens are better able to survive.

While you can’t get rid of the meat bees completely, especially in bad years, here are some suggestions on how to keep them from ruining your camping trip.

The Buzz on Sierra Yellow Jackets

First, let’s talk about who these little creatures are. After all, it helps to know your enemy.

At Lake Tahoe and the Sierra, the yellow jackets that dive bomb your meat and sweets are mostly Western Yellow Jackets (Vespula pennsylvanica). The Common Yellow Jacket (Vespula vulgaris) might also be buzzing around and can scavenge for protein-packed and sugary foods. Yellow jackets can make any camper’s life miserable. But they’re actually beneficial and eat insects that destroy your garden plants.

As summer wears on and the yellow jacket numbers grow, their normal food supply isn’t enough to feed them all. The meat bees must seek out other food. By late summer, the yellow jackets need a lot of sugar to help the queen and workers do their job. That’s why they like to go after your sweet beverages and desserts. But they still need protein during this time. So, meat bees will  live up to their nickname by hovering over your hamburgers, hot dogs, and steaks.

How To Reduce a Yellow Jacket Invasion at Your Campsite

Here are some suggestions on how to reduce the number of these unwanted guests at your campsite. Using a combination of methods can work best. (We’ve included some Amazon affiliate links in the copy below, which doesn’t cost you anything extra. But it does allow us to raise some funds to support this website so we can continue to write blog posts like this one.)

Yellow jacket traps sing a siren call to yellow jackets by using a chemical attractant. The traps usually only attract Western Yellow Jackets and not other kinds. This is the type of yellow jacket that poses the biggest problem in the Sierra, so the traps are a good bet. However, they will only reduce the number of foraging workers in camp, not get rid of them completely.

To make the traps work better, add some chopped barbecued chicken. Replace the meat frequently since yellow jackets don’t like rotting meat. From time to time, remove trapped yellow jackets and check to make sure the trap is still working. If not, it may need to be replaced. This should only be an issue if you’re camped somewhere for a long time.

If you do add BBQ chicken to the traps, put them in the bear box at night. Otherwise you could attract a much larger pest than just a yellow jacket.

Here’s how, based on advice from El Dorado County Environmental Management:

•  Position a stick across the top of the bucket.

• Using wire or string, hang a can of tuna or fish-flavored cat food from the stick’s center. The can should dangle about half inch above the water. Punch 3 large holes in the bottom of the can.

• Set the trap in a tree out of reach of children and pets. The idea is that the food weighs the yellow jackets down. They fall into the water and sink.

Warning: The food that attracts the yellow jackets may also attract bears. We only recommend using a homemade trap like this when you’re camped at a lower elevation—for example down in the foothills or on the coast—where a bear encounter is less likely.

Organic gardeners often use neem oil to protect their plants from harmful insects. It kills yellow jackets and stops females from reproducing. Mix the neem oil with water in a spray bottle according to directions. Spray it on the picnic table. If that doesn’t work, add more neem to the neem-water combination to create a stronger smell. You can also put straight neem oil in bowls around the picnic table to produce a stronger smell.

Spraying neem oil on your skin may stop the yellow jackets from landing and stinging you. Add neem oil to unscented skin lotion and rub it on your arms and legs. It does have a strong scent that some people don’t like. If this is the case with you, use just a little bit mixed in with the lotion.

Spray peppermint essential oil on the picnic table. It won’t kill the wasps, but they don’t like the scent and may stay away. You can also try a battery-operated diffuser to spread the aroma in the air. To keep the yellow jackets from landing on you and stinging, combine the peppermint essential oil with unscented lotion and rub it on your skin. When you leave camp, put the diffuser in the bear box or your vehicle if there is no bear box. The aroma could attract the attention of any bears wandering past.

Put a Screened Canopy Over The Picnic Table

A screened canopy can help you have a more peaceful breakfast, lunch, or dinner. It’s much easier to prepare food without a cloud of yellow jackets swarming around you. Here’s a canopy that gets lots of good reviews on Amazon. Just be sure to buy the bigger size to make sure it fits over the picnic table.

Other Advice for Getting Rid of Yellow Jackets

Put a quick, easy breakfast in your day sack, such as breakfast bars. Go hiking and eat the breakfast bars on the trail. Most of the food yellow jackets want is concentrated in the campground or in picnic areas. If you eat far away from the campground on a hiking trail, it might take them five or ten minutes to find you. And it might only be one or two scouting yellow jackets instead of a swarm. With luck, by the time they’ve found you, you’ll be done eating.

Cooking after sun down is another good way to avoid the yellow jackets. And make your sandwich for next day’s hike the night before. Put it in the cooler so you can grab and go the next day without having to fight off meat bees.

It’s also a good idea to cover all your beverage cans and containers. This keeps yellow jackets from crawling inside.

One final recommendation: try switching campgrounds. This is a long shot. If the bees are bad in one location, often they’re bad everywhere. However, in 2011, after I finished my Mount Whitney hike, I moved from Whitney Portal Campground farther north to East Fork Campground in Rock Creek Canyon. The yellow jackets had been really bad at Whitney Portal. But I didn’t see a single yellow jacket at East Fork.

If it’s a busy weekend, finding a campsite at another campground may not be possible. But if you’re camping during the week, moving to another location might take the sting out of your camping trip.

If You Get Stung

Unlike bees, yellow jackets can sting more than once. If you anger one of the little devils and it stings you, the swelling and pain should go away in a few hours. It’s a good idea to disinfect the sting site with hydrogen peroxide or alcohol. To reduce swelling, apply ice.  If you are allergic and have a hard time breathing or experience dizziness, nausea, or hives, seek medical attention.

Have The Yellow Jackets Been Bothering You?

Comment on this blog post and let us know how the yellow jackets have been this year at campgrounds in the Sierra. One was buzzing around me while I prepared my lunch at Mount Rose Campground in late August 2019. And on September 2, 2019 another one tried to get at my pasta salad when I was hiking up at Molybdenite Creek Canyon near Obsidian Campground. 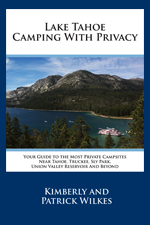 Lake Tahoe Camping With Privacy:
Your Guide To The Most Private Campsites Near Tahoe, Truckee, Sly Park, Union Valley Reservoir, And Beyond

Have A More Relaxing Camping Trip By Knowing:
• Exactly which spaces in established campgrounds are surrounded by aspens and willows.

• Which spaces are the farthest away from the neighbors.

• Which campsites are plagued by road noise.

• The campsites with the most privacy on recreation.gov or first-come, first-served campgrounds. Know exactly what you’re getting when you book online. 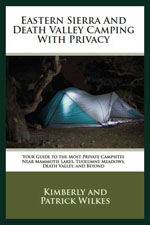 “Love this book. Used many of the sites with my family. It’s also great for families with kids in that they have their own space.”—Peter F.

“I picked up the book last year and used it to find a couple of nice spots. I hope to get lots of use out of it.”—Alan C.

“We love your book! Lots of great info!!”—Sharon C.